How sure are you that you have close to 0 critical CVEs in your Kubernetes cluster?

Just like for all companies today security is top of mind for Xenit and we try to come with a solution for this question.

At the time we were already scanning our images in our CI/CD pipeline at creation time using Trivy, but what about new CVEs that gets disclosed after the initial image build?

The increasing rates of cyber crime (by some measures, cyber crimes now outnumber all other crimes put together) which makes it harder for companies to protect themselves. The faster we can fix relatively simple problems like patching a CVE on container level the more secure we will be.

Xenit is hosting a number of Kubernetes clusters for our customers and we want a quick way of visualizing CVEs on a platform and a per customer basis. We want to achieve this without having to jumping around to different clusters and run some script to find out the answer to this question.

How can we do better?​

Could one solution be to scan the container images continuously that are running in the Kubernetes clusters? Or should we just continuously scan the images that are stored in our private image registry? But what about the images that isn't our private image registry? What about the third-party images that we use from places like Quay or Docker hub? Some people would argue that these images are the most important ones to scan.

At Xenit we already have a central monitoring solution that we use to monitor the status of all our clusters why not think of CVEs just like another metric?

To be able to solve all our questions we decided to go with continuously scanning the images that is running in the Kubernetes clusters.

As mentioned earlier we already scan our images in our CI/CD pipeline and there we use Trivy. So it was a natural fit for us to got with Aqua Securitys Starboard. Starboard is a reporting tool that supports multiple Aqua Security tools like Trivy for vulnerability report, but it also supports conftest and kube-bench among others. In this post we will only focus on the vulnerability reports generated from the image scanning.

When starting to use Starboard we noticed a few features that where missing and we really needed. Since Starboard is open source we thought: why not help to implement these features?

The first issue we found was that the Starboard operator is only able to scan the images and show the result as a CR (Custom Resource) but no metrics of how many CVEs we have per container image.

As a part of Xenit Kubernetes Service (XKS) we supply our customers with monthly reports and we wanted to be able to provide them with simple visualization to see the number of critical CVEs on their applications. It turns out that we weren't the only ones that thought missing metrics was a problem and the great people over at Giantswarm had implemented a solution for this called starboard-exporter.

After helping out to clean up their Helm chart a bit we started to use starboard-exporter in production.

This made it possible for us to start generating metrics but after some time we realized that the data was strange, this was due to duplicate metrics for the same CVE.

To solve this we introduced a new environment variable OPERATOR_VULNERABILITY_SCANNER_SCAN_ONLY_CURRENT_REVISIONS to Starboard in #870 and if set to true it will only create vulnerability report for the latest replica set in a deployment.

Great now we had metrics that we can trust, but wasn't the whole point of this work to continuously scan for new CVEs in the cluster?

So now we were able to scan our public images, we could get metrics and updated scans as often as we want. But what about privates repositories?

Luckily just as we were thinking of starting to work on this feature someone else from the community did the heavy lifting and added support for Azure in Fanal. Fanal is the library that Trivy uses to scan images, and by fixing this together with a number of other commits to both Starboard and Trivy the problem was solved.

There had been a PR to add to the possibility of setting a custom label on your Starboard jobs thus giving us the possibility to of using aad-pod-identity per Starboard job. Aad-pod-identity makes it possible to talk to Azure from a container without having to worry about passwords so it's something we definitely want to use. But instead of running Starboards vulnerability scan jobs in server mode (which is the default), we are running Starboard in client mode. We have deployed a separate Trivy instance in our cluster to cache all the images that we scan and this saves us allot of time per image that is used in the cluster.

The problem was that the Trivy helm chart didn't support setting custom labels on the Trivy stateful set so we created a PR to solve it.

Thanks to this we are now able to quickly generate dashboards with the amount of critical CVEs in our clusters for both public and private images. And we can easily show them to our customers through our report, for example: 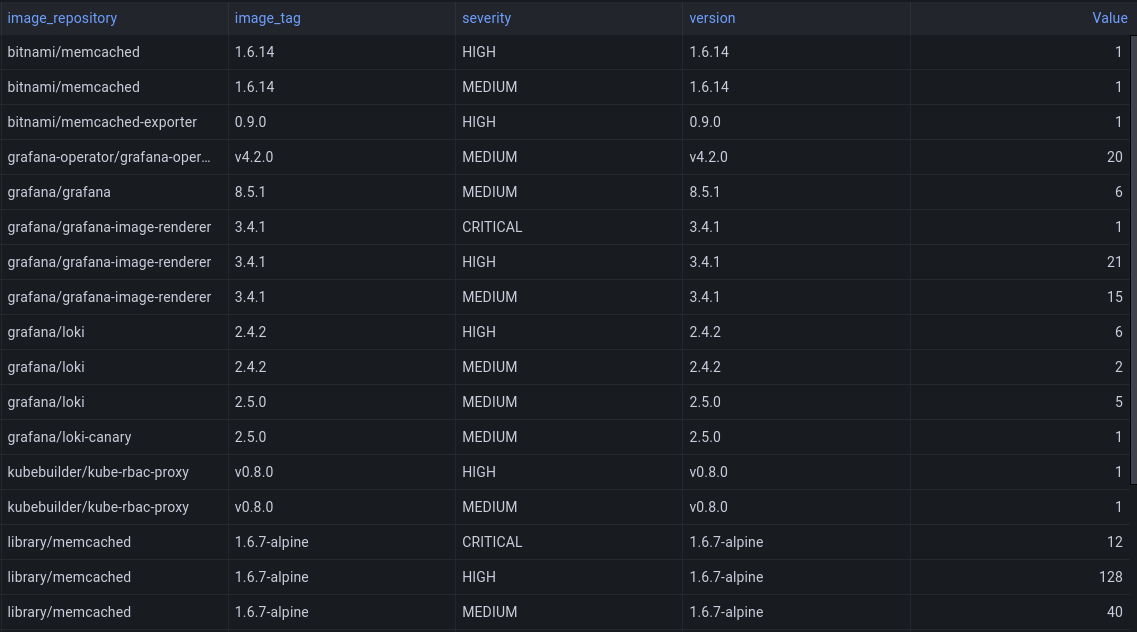 Short term the feature I'm mostly looking forward in Starboard is the possibility to cache the result of scanned images cluster wide. This would reduce the amount of scans allot especially when it comes to images like Linkerd side-cars. There is already a design PR open and the discussion is ongoing, so feel free to jump in to the discussion.

We at Xenit love open-source and think it's really important to be able to give back to the community when we can. A big thanks to the maintainers over at Aqua Security and Giantswarm for there great job and being extremely helpful getting these new features merged quickly. It's amazing to always be able to stand on the shoulders of giants.